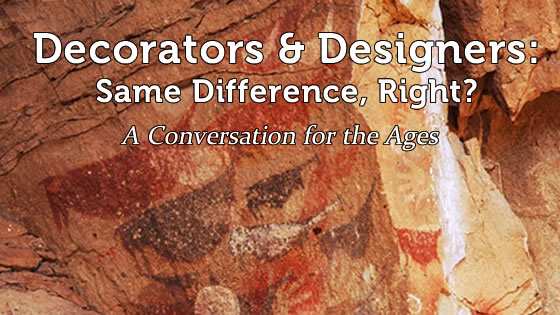 I don’t like being called a decorator. I am an interior designer. My clients often use the word decorator interchangeably with designer. I get it, we share similar skill sets and we both make house calls. And… I do not seek to dis’ my interior decorator colleagues in the least; rather I wish to clarify the difference between the two professions.

Humans are toolmakers and builders but interior design and decoration has been around as long as humans have dwelled in shelters whether in caves, teepees, cabins, or mansions. It is human to adorn and design. Some of humanity’s oldest images adorn the walls of caves.

Paleolithic Leader: “Good job scouting out that big cave complex, Thak! I like that it is near water and the walls have some nice shiny rocks in them… I will take the largest, lightest chamber up front.”

Paleolithic Interior Designer: “This is a great choice, Wog, but wouldn’t you rather have a smaller chamber away from the entrance? It will be more protected from the saber tooth tigers that hunt at night, and the smoke from our fires will vent better up near the entrance.”

Paleolithic Interior Decorator: “She’s right, Wog, I can make your sleeping area absolutely lux with those Wooly mammoth hides we tanned last spring and we can spruce up those sparkly walls even more with mica dust mixed with bear fat!”

Paleolithic Leader: “That makes sense, Moog. You know when I come home late from hunting wildebeests all day that Luda hates it when I get blood and offal all over the floor.”

Paleolithic Interior Designer: “No worries, Wog. We can ask Tral to make a cold hut for the meat out near the stream in that shady spot where the sun never shines and we can make a smoke hut nearby. Barbeques with the clan downriver will be so much more convenient than the old cave up in the hills.”

Paleolithic Interior Decorator: “Oh I can see it now, we can boil up some wild beets and mustard greens and draw big bold animal figures all over the ceilings!”

Paleolithic Builder: “You sure do keep me hoppin, Dev! First it was scaffolding for the walls in the old place, now the ceiling! Next thing you know, Moog will want a sky light so the kids can practice chipping arrow heads on dark winter days!”

16th Century France  (A few kilometers south of the caves)

Renaissance Marquis: “Every week somebody is attacking this damn Chateau! I swear if it’s not the Catholics it’s the Protestants! I swear it is a full time job trying to stay on the good side of the king and not get burned out of my house!”

Renaissance Architect: “Sir, the men are grumbling that the 70 tons of brick I ordered for the new fortifications is blocking the gates and the kitchen staff has helped themselves to the brick for additional ovens and kitchen renovation.”

Renaissance Interior Designer: “All due respect my liege, the cooks needed to do something radical after the fire that burnt down the laundry and half the kitchen last month. I thought using brick more liberally than wood might be safer considering the open fire pits we have going … feeding all the extra stonemasons and ironsmiths. If you please, it might be a good idea to add an extra door from the courtyard gardens so that we can load all the produce with out getting shot by arrows from the road.”

Renaissance Interior Decorator: If I may sir, I ordered a new tapestry to celebrate the King’s victory at the battle of St. Leon Sur Vezere, I know it will make a great impression on his majesty when he gets word through the grapevine …I took inspiration from all those arrows and cannon balls that ruins the west rampart last fall and created the cutest boarder design… I also commissioned new linens from the mills in Flanders and some amazing gold candlesticks and serving trays for the King’s visit in April. We want to be up to date on the latest styles at court and the new queen loves yellow jonquils…. That will be so yesterday’s news by the holidays.”

Modern day Architect: “If I have to deal with one more building code design review regulation I am going to spit!” The damn brick guys left a ton of bricks in front of the gates and so the delivery trucks are refusing to make their deliveries this week.”

Modern day Architect: “That’s okay, my guys went on a bender last night so they are running a little behind. Oh, here comes our client…don’t say anything!”

Modern day client: Who left all that ugly brick by the gate? My husband will have a fit! We only have a few months to get this vacation home done and then we need to get back home so the kids don’t miss school at the French American school.”

Modern day Interior Designer: “You know, I have been thinking that soapstone really might best best fit for the countertops since we couldn’t source the Italian marble that was scheduled… too bad about that quarry shutting down due to border disputes with Greece and the Euro zone.”

Modern day Interior Decorator: “OMG! I found the perfect little Scalamandre wallpaper for the entry… it has this arrow motif, very retro chic! And here’s an idea, what about painting big bold animal figures down the hall?”

I hope you enjoyed our historical eavesdropping tour. Most home building issues are timelessly consistent — only the technology changes. Have you noticed that animal prints never go out of style? We all love sunlight as it spills across the floor of our den, hut or palapa. And most of us still care deeply about making and marking our homes.

As a professional who often interfaces with architects, builders, clients and other designers and decorators, I marvel at the talent, effort, emotion, time and money spent on our dwellings and I think it speaks volumes about us as humans. To design and build and adorn is part of who we are as a species. I love fabulous decoration and admire
many decorators, but look for me in the Interior Designer listings in your Google search.